The racing community has been pushing hard on the C8 Corvette platform since it hit the streets last year and FuelTech has been one of the leaders with the latest Chevrolet sports car platform. For those unaware, FuelTech is a multi-national vehicle technology company that specializes in engine control units and other components for all forms of motorsports. The FuelTech C8 Corvette is a race-only project vehicle being used to develop engine management systems for late-model powerplants utilizing direct injection and also to create hardware and software solutions for advanced transmission controllers. 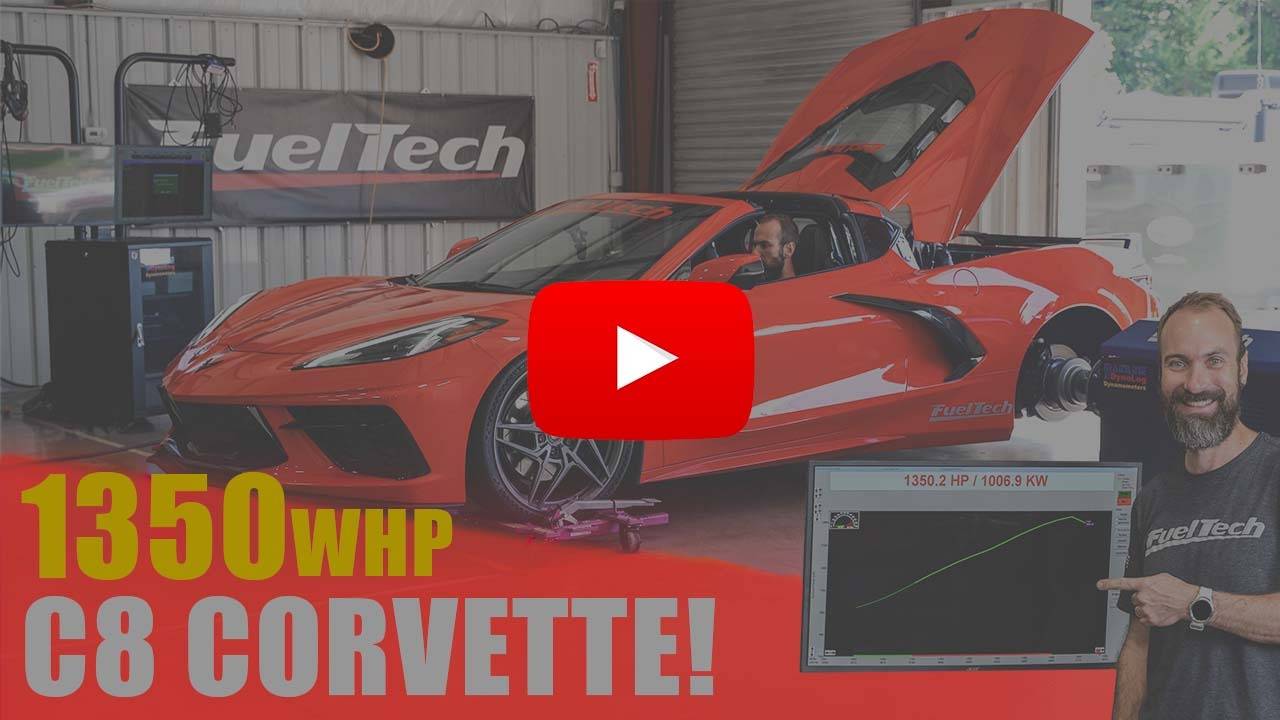 Anderson Dick, founder and CEO of FuelTech, has pushed the twin turbocharged LT2 engine platform into the mid-9s and was one of the first to eclipse the 1,000 WHP barrier. There has been a friendly rivalry between the FuelTech crew and Emelia Hartford as they’ve traded the drag strip and power output records back and forth over the last 6 months. Recently, Hartford rolled out 1,201 WHP—essentially declaring her Corvette the first to 1,400 crank-measured horsepower. Anderson and the FuelTech quickly responded by raising that bar even higher with 1,350 WHP from the research project car. For those wondering, that puts the LT2 output north of 1,500 horsepower at the crank and probably closer to 1,600.

The combination is a simple one as it uses two Garrett G35-900 turbochargers mounted topside that provide plenty of boost to the fortified LT2 engine. Simplicity reigns in this engine compartment—the turbo kit doesn’t have an intercooler due to the use of methanol fuel to help cool the incoming air. Late Model Racecraft’s Steve Fereday inspired Anderson to build this turbo combination. As if that isn’t enough, Nitrous Outlet adds extra air to the engine through chemical enhancement, which also helps cool down the non-intercooled turbocharged air, which wasn't actually used on this dyno runs as turbos were enough to generate the power, but can be useful on the racetrack and it is fully controlled by the FT600 progressive nitrous control. The Corvette features a unique dual fuel system setup that uses the factory direct injection and stock fuel tank for primary fuel delivery. A complete second fuel system has been added to the Corvette with an Aeromotive brushless pump delivering VP Racing Fuels M1 to an independent set of Injector Dynamics fuel injectors, which are mounted in a custom sheetmetal intake manifold. 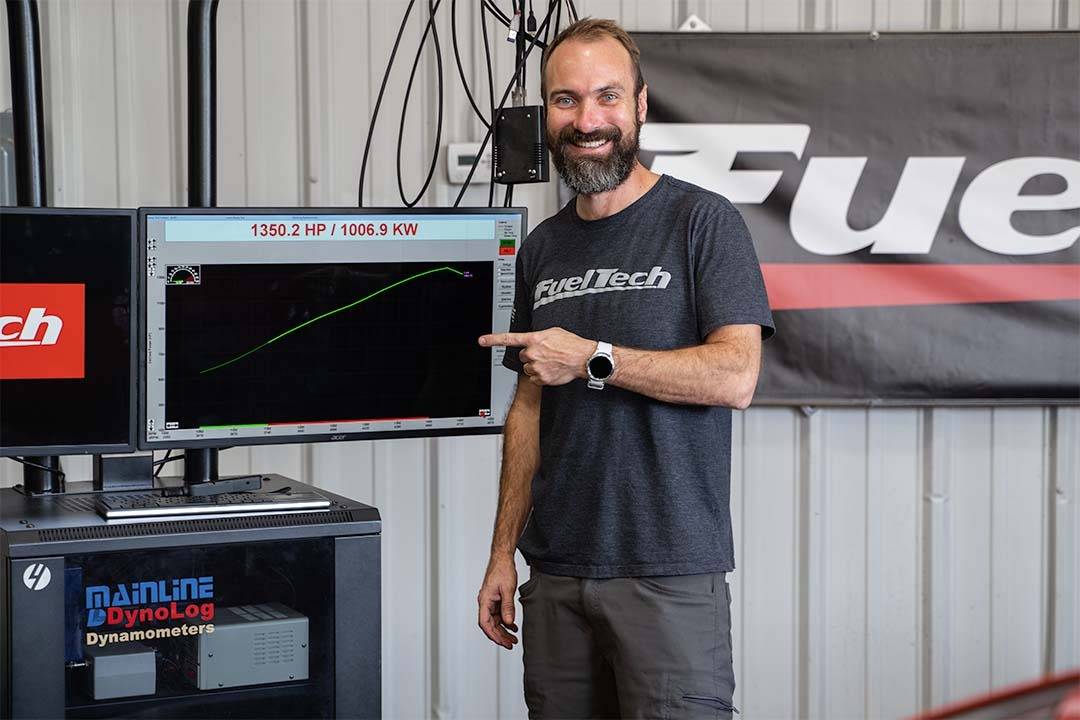 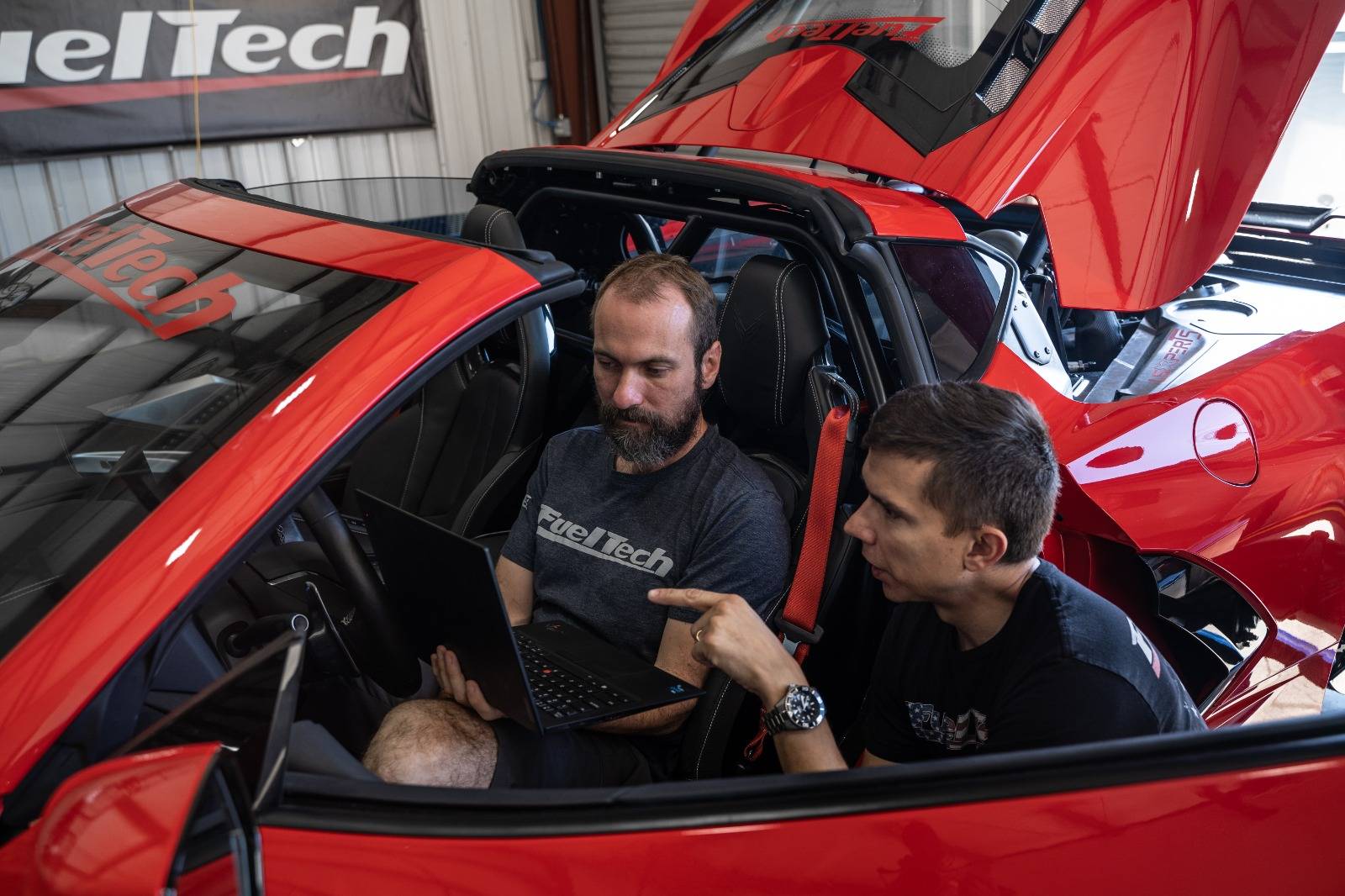 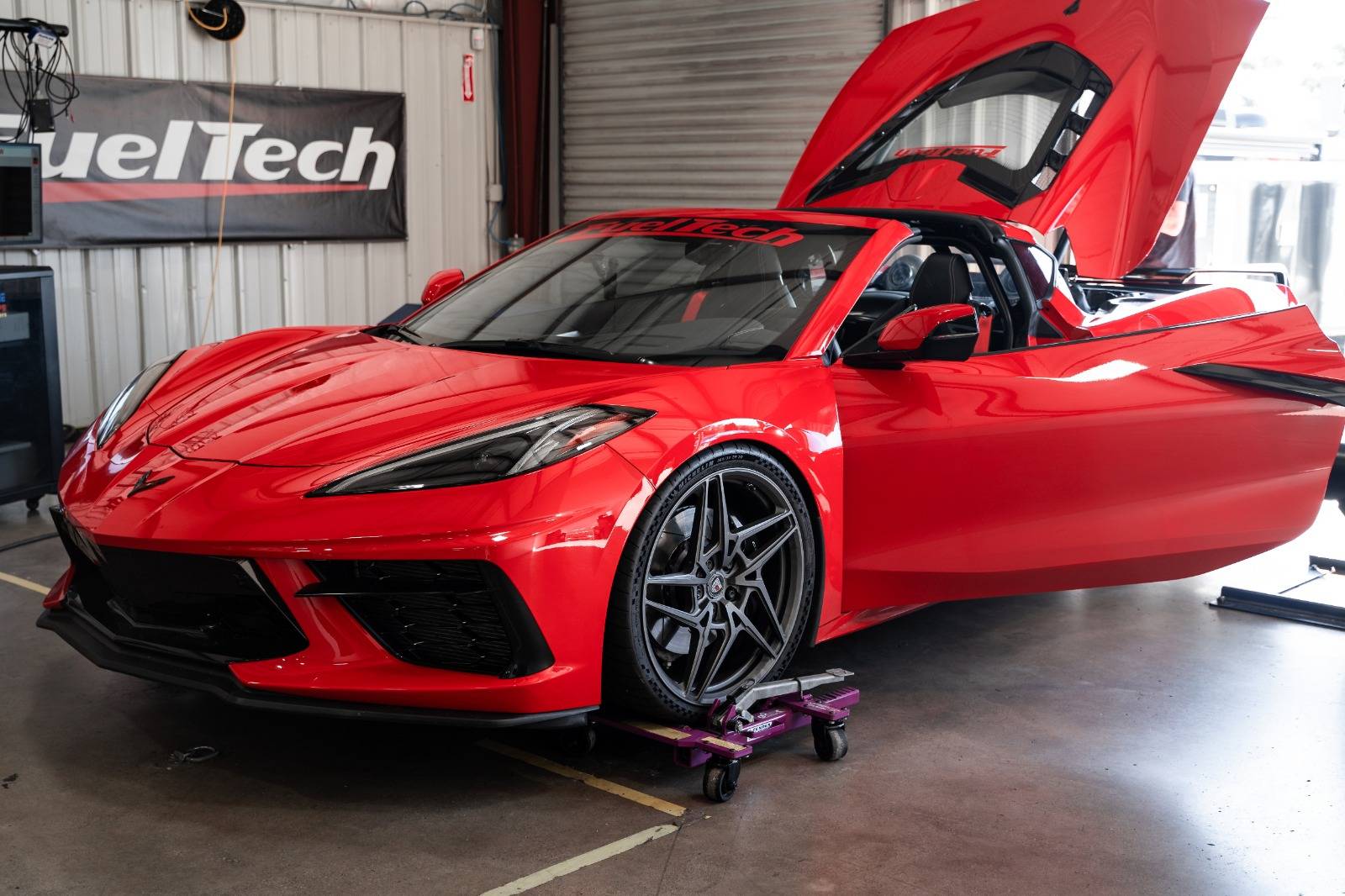 The EFI setup on the FuelTech C8 Corvette features a custom jumper harness that allows a FT600 ECU to control fuel and timing in this twin turbocharged combination. The ECU has full control over the secondary fuel system and activates it when the intake manifold sees positive pressure. The FT600’s internal boost controller, that can control a regular CO2 based wastegate control or the newer technology of electronic wastegate, and power management options allow Anderson to custom program the power curve, which is a critical function in getting the vehicle to perform properly on the drag strip or road course.

The new 1,350 WHP record largely due to a new transmission strategy that FuelTech developed for the test car. The team built a new wiring harness to allow a second FT600 control system, whose only task is to preside over the transmission functions. Anderson was tight-lipped on the tech specs behind their new control unit, but he said FuelTech developed a key tuning strategy to prevent the factory PCM from triggering the OEM torque reduction table.

The team relies on the primary FT600 as a data logger to record factory sensors at a high sampling rate in addition to an assortment of FuelTech sensors. The Corvette employs two WB-O2 Nano meters that monitor the air/fuel ratio through Bosch LSU 4.2 sensors in the exhaust. Other sensors wired into the FT600 include backpressure canister, 0-150 psi pressure sensor to monitor the port fuel injection, two backpressure sensors for each turbocharger as well as turbocharger speed sensors. Anderson also added two FuelTech EGT-4 kits, which allows individual cylinder EGT monitoring for all eight cylinders, aiding in complete data collection and engine safety.

From record breaking 5,000HP Pro Modified drag vehicles to the most high-tech American sports car of all-time, there is a reason FuelTech is the choice among champions and enthusiasts and it is why you’re seeing #FuelTechEverywhere

His latest creation is perhaps the wildest one in the fleet and most likely the shiniest—and if you’re familiar with Hudson’s cars over the years, that is a bold statement.

One of the unique advantages of being a FuelTech customer is access to its in-house Mainline Hub Dyno and the unrivaled technical support that FuelTech has become known to provide.

The X275 category is highly competitive and it requires a lot of testing and tuning to ensure the combination is running in tip-top shape.