They say timing is everything and that is certainly holding true for Anderson Dick and the FuelTech team as everything is starting to come together with their C8 Corvette project vehicle. The team recently captured the title for the highest output by a C8 Corvette thanks to a robust 1,350 WHP performance on FuelTech’s in-house Mainline Hub Dyno. Now, Anderson and the group can lay claim to the quickest ET ever from Chevrolet’s new platform thanks to a 9.017 at 153.13 mph during a test session at Virginia Motorsports Park. 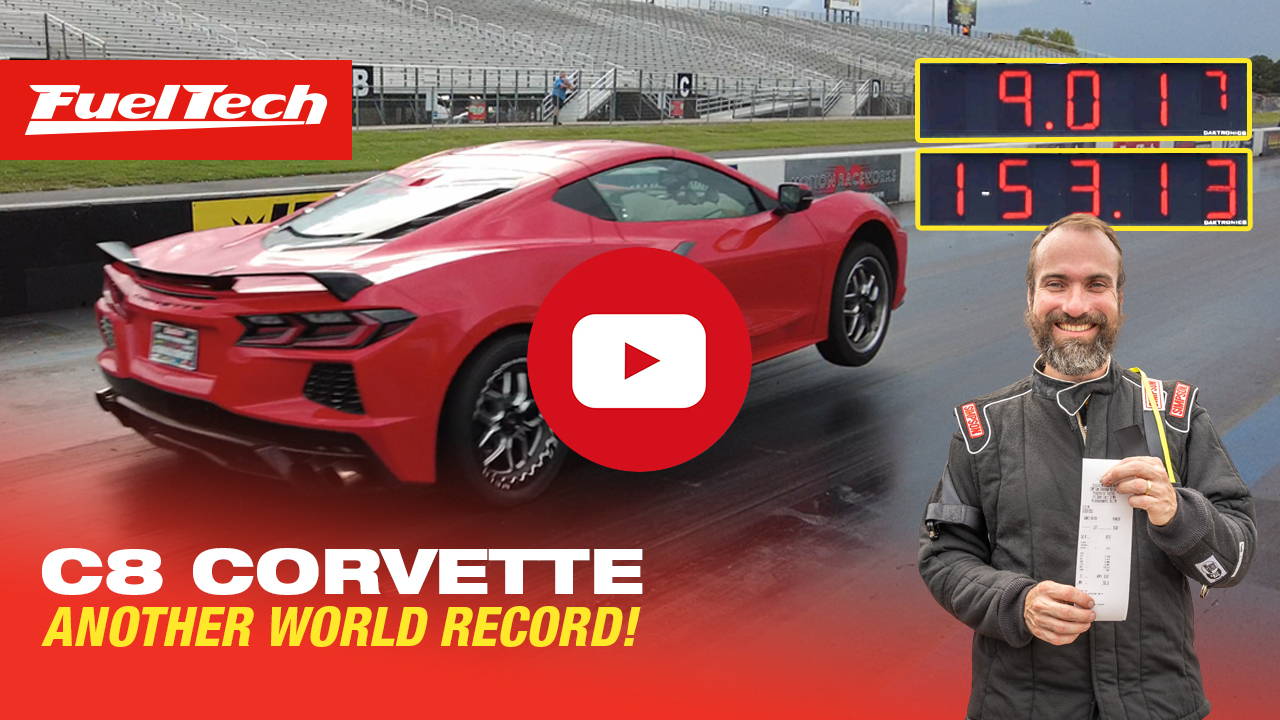 The heat and humidity have been persistent during the team’s outing at the Shakedown Nationals, which makes the record-breaking performance that much more impressive. The 9-oh run was hardly a one hit wonder; Anderson began the day with a 9.27 at over 150 mph off the trailer. After consulting with FuelTech’s Luis De Leon, the car was pushed one step further with a 9.17 result. That is when Anderson knew a few more tweaks to the drivetrain management could produce some incredible results. The third run netted a 9.048 at 153.47 time slip, which was quickly followed up with an even quicker 9.017 at 153.13 mph and solidifying the FuelTech R&D racecar as the quickest C8 Corvette of all-time. For those keeping track, the vehicle rolled over the scales at 3,950 pounds with driver. It still sports 18-inch wheels, for those inquiring, and Anderson recently swapped over to four matching Weld Laguna wheels, which are a brand-new design set to hit the market.

This past summer the FuelTech R&D staff built a new wiring harness to enable the use of a second FT600 engine management system. One FT600 is used for engine control while a second one focuses on drivetrain functionality so the vehicle can use all of its glorious 1,350 WHP. The factory PCM, which is still responsible for some engine management and other vehicle systems, will severely reduce the engine’s output at the gearshift to preserve the drivetrain if it senses an excessively large torque load. FuelTech designed a work-around to enable the drivetrain and engine package to be used in hardcore racing applications on the drag strip or the road course. Understandably, Anderson wouldn’t reveal too much on the drivetrain control until it has been completely developed as a turnkey solution for the motorsports world. A major component to the transmission durability has been the Stage 2 Dodson clutches that utilize 9 and 10 frictions in comparison to the OEM clutch setup with 5 and 6.

The engine combination is a simple one as it uses two Garrett G35-900 turbochargers mounted topside and they are capable of providing plenty of boost to the fortified LT2 engine. The engine components were sourced from Gwatney Performance and the line-up includes forged Diamond Pistons. Anderson also consults with Pro Line on the engine platform for optimum durability. 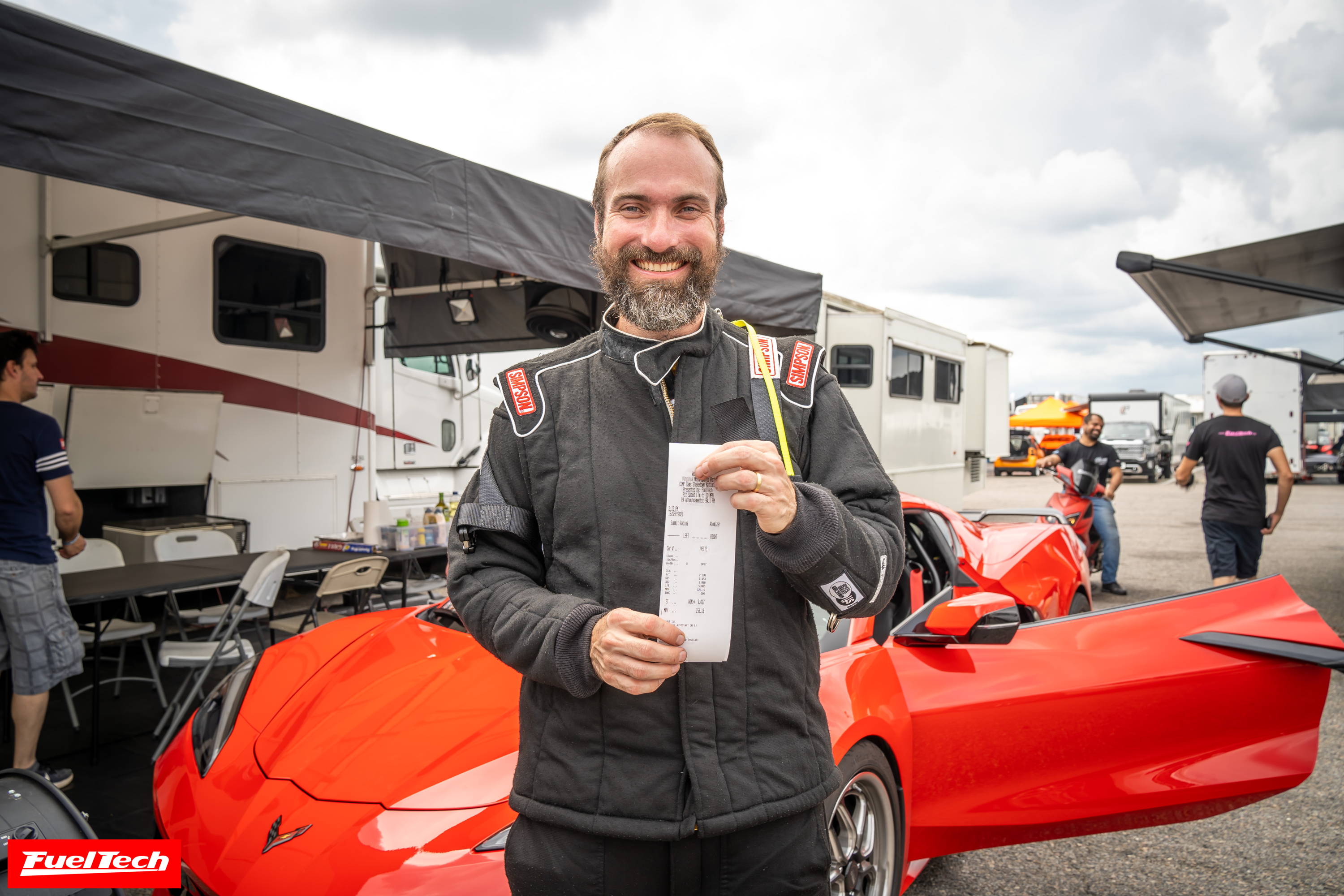 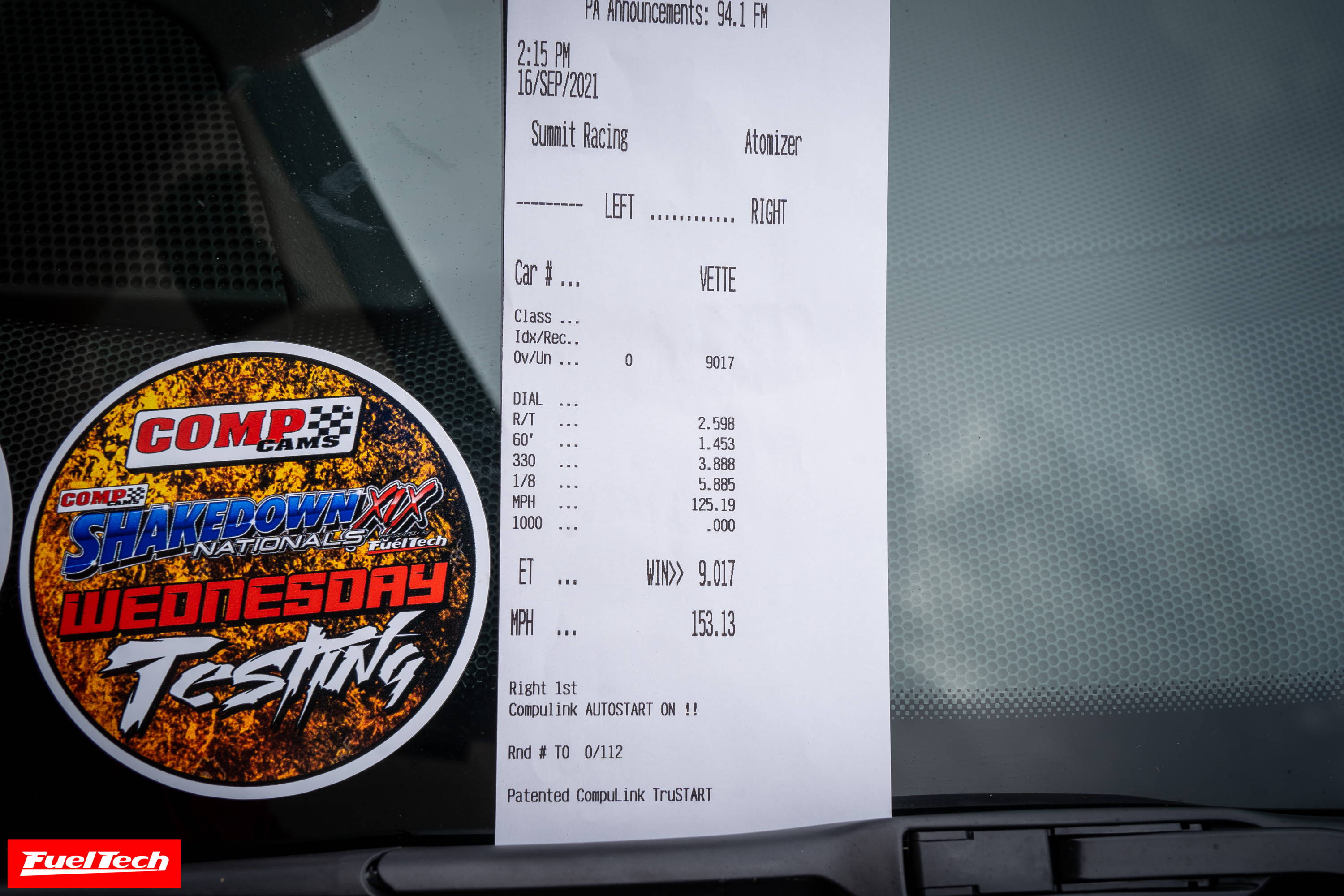 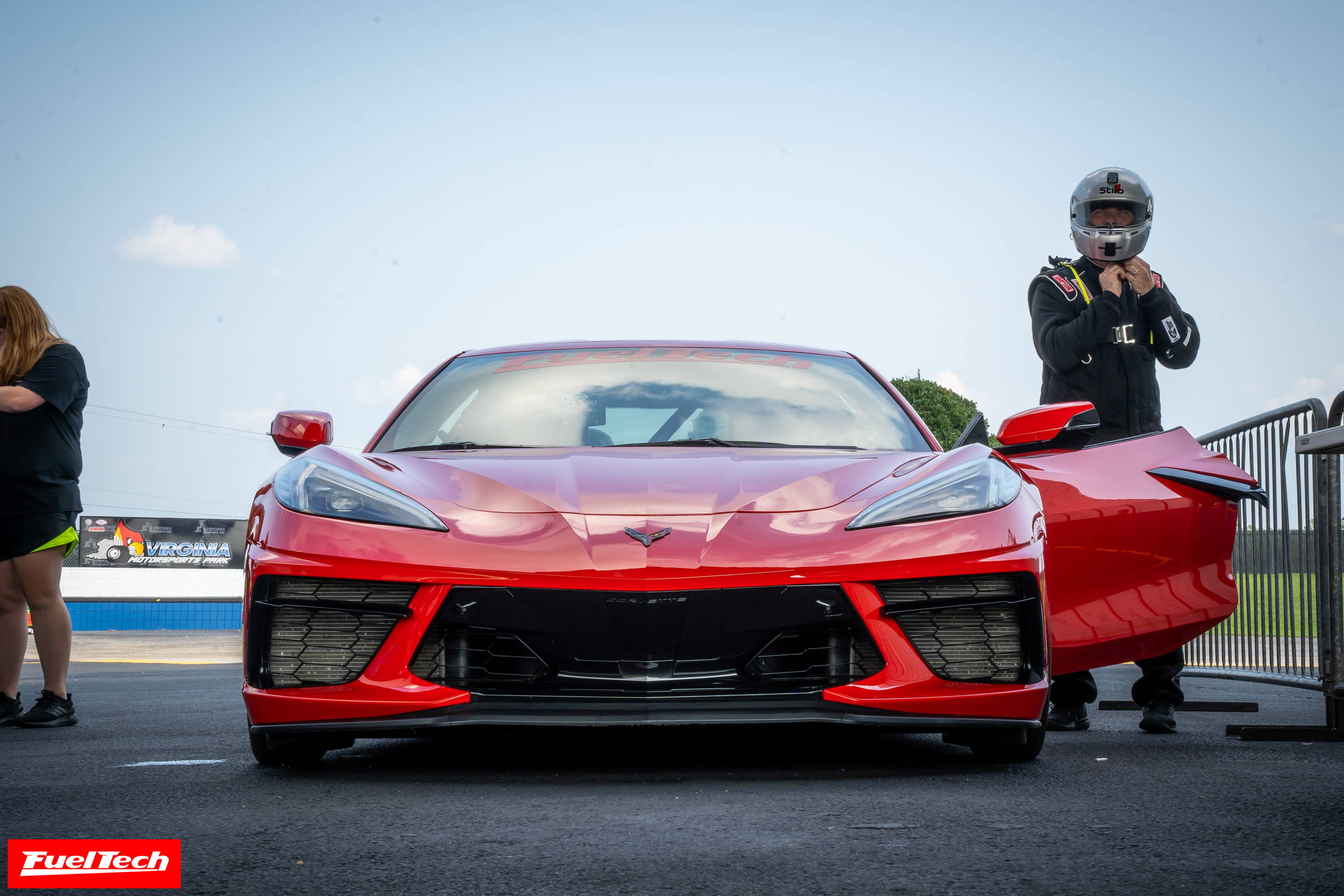 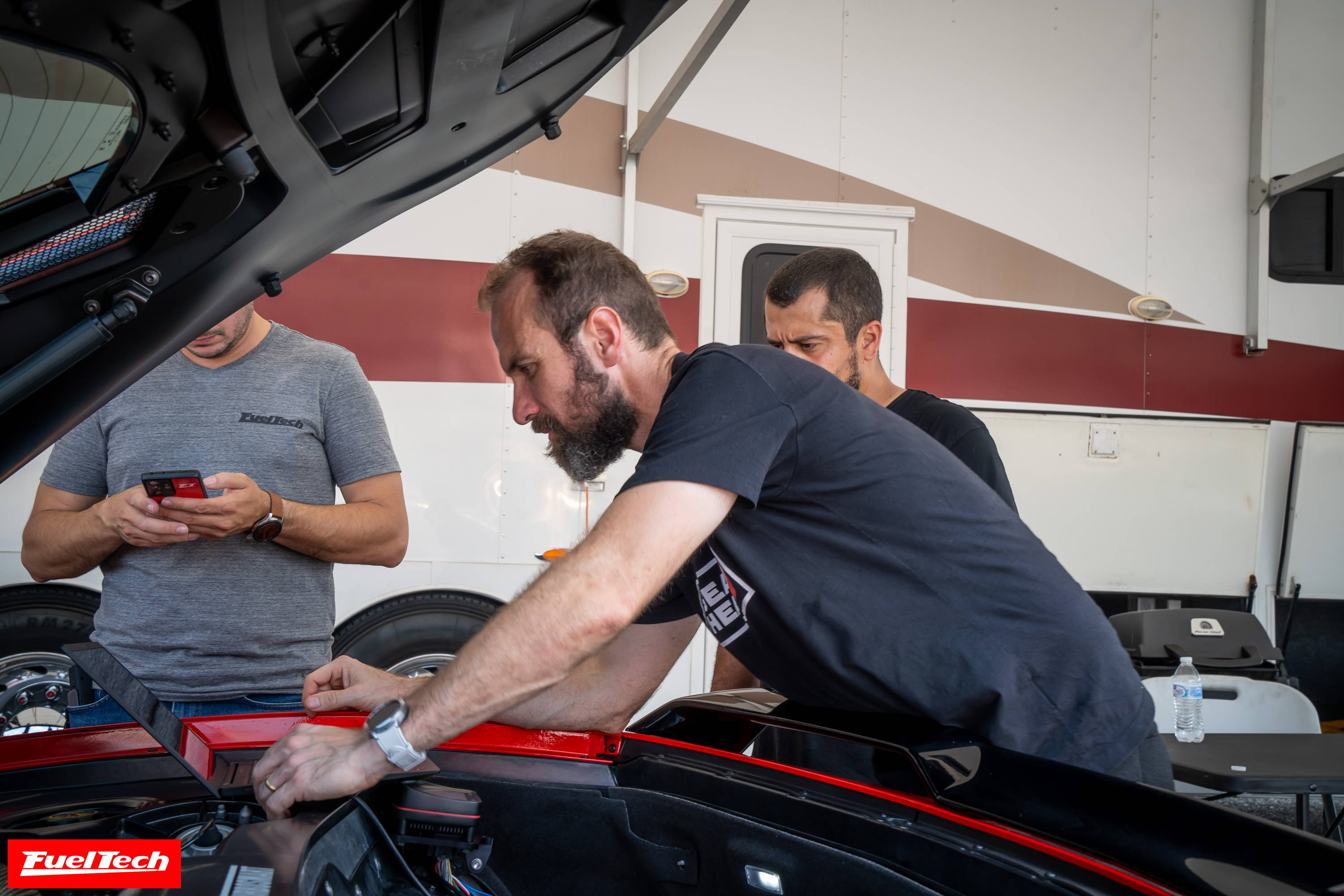 The engine compartment is very straightforward—the turbo kit doesn’t have an intercooler due to the use of methanol fuel to help cool the incoming air. Late Model Racecraft’s Steve Fereday was a heavy influence when Anderson embarked on building the turbo combination. The turbo package relies on Turbosmart wastegates, which are essential components due to the extreme demands for this combination’s power management. The quick response is paramount to accurate shifting and drag strip performance. The next step is to switch to Turbosmart’s new electronic wastegates for even better control and the FuelTech FTManager software includes that option already.

A couple of turbochargers are almost always never enough in this high-stakes game. Nitrous Outlet provides extra air to the engine through chemical enhancement, which also helps cool down the non-intercooled turbocharged air. Anderson has been adamant that the reason for the exceptional launches and quick 60-foot times are due to the instant of nitrous off the starting line.

The Corvette features a unique dual fuel system setup that uses the factory direct injection and stock fuel tank for primary fuel delivery. A complete second fuel system has been added to the Corvette with an Aeromotive brushless pump delivering VP Racing Fuels M1 to an independent set of fuel injectors, which are mounted in a custom sheetmetal intake manifold.

The team relies on the primary FT600 as a data logger to record factory sensors at a high sampling rate in addition to an assortment of FuelTech sensors. The Corvette employs two WB-O2 Nano meters that monitor the air/fuel ratio through Bosch LSU 4.2 sensors in the exhaust. Other sensors wired into the FT600 include backpressure canister, 0-150 psi pressure sensor to monitor the port fuel injection, two backpressure sensors for each turbocharger as well as turbocharger speed sensors. Anderson also added two FuelTech EGT-4 kits, which allows individual cylinder EGT monitoring for all eight cylinders, aiding in complete data collection and engine safety.

From breaking records in professional motorsports to setting records on the drag strip and the hub dyno with the most advanced American sports car, that is the reason you’re seeing #FuelTechEverywhere