There is no doubt that FuelTech is widely known in the Pro Modified, No Time/Grudge, and Outlaw ranks but the truth is the company is growing quickly on the bracket racing side of drag racing. The case in point is the incredibly nice 1971 Plymouth Cuda, driven by Nate Sayler from SFR Performance.

A Pro Line Racing 481X Stage IV engine package, which has a ProCharger F-3R-136 supercharger fastened to the front of it, powers this classic body Pro Modified style car. The combination belted out 2,716 WHP and 3,652 lb-ft of torque, showing that big power is very much part of the game when it comes to Top Sportsman racing. Larry Jeffers Race Cars constructed the chassis while RK Racecraft was tasked with making it a turnkey car, including wiring in a complete line of FuelTech products. 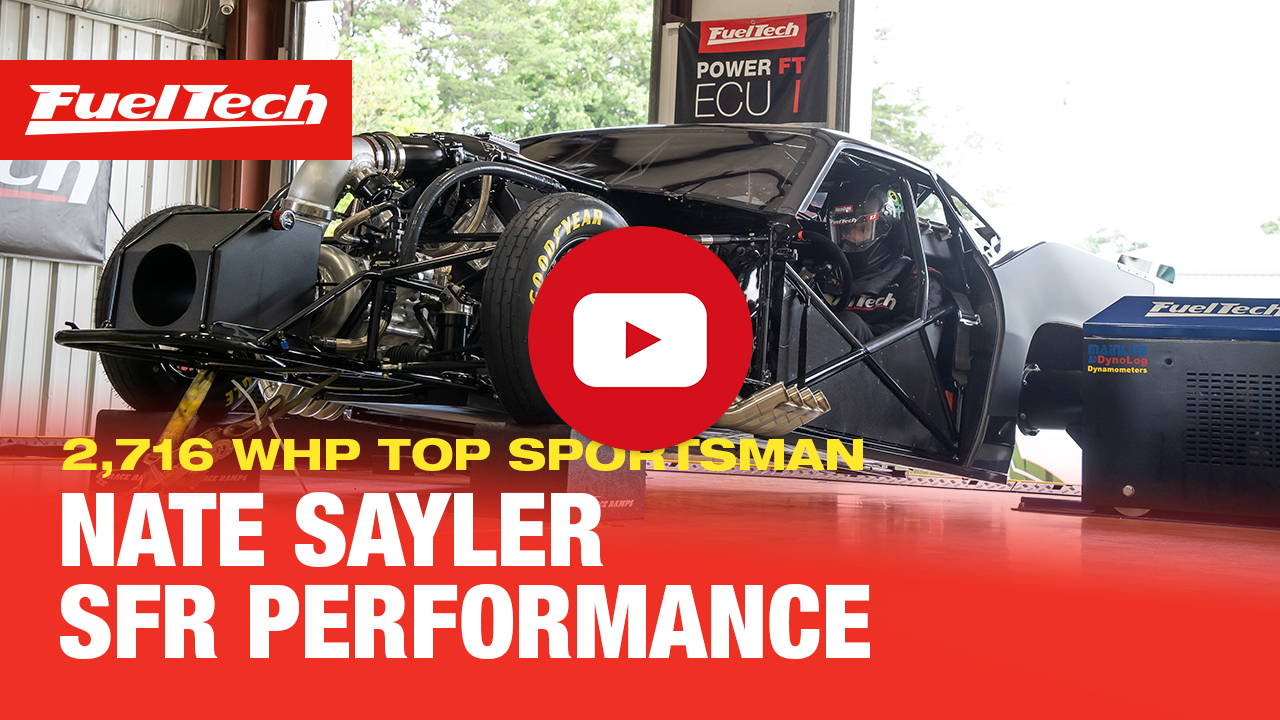 Pairing a Pro Line Racing 481X with a FuelTech engine management system is like making a peanut and jelly sandwich, each are great on its own but both should be enjoyed together. RK Racecraft installed an FT600 ECU as the starting point and placed it on the steering column. All PowerFT engine management systems—FT600, FT550, FT550LITE, and FT450—offer a significant number of options that are beneficial in bracket racing categories like Top Sportsman. The standard features in these ECUs include sequential injection and ignition, O2 closed loop, Data Logger, Boost Controller, Nitrous Controller, and even a Delay Box option that is specific for bracket racing!

The FT450, FT550, and FT600 ECU units also include LCD display and touchscreen, showing real-time data and allowing the user to make adjustments without a PC connection. Not only does it display the real-time information from the assortment of sensors wired into the system, all PowerFT ECUs are capable of data logging each sensor and eliminates the need for an additional system to be built into the vehicle. 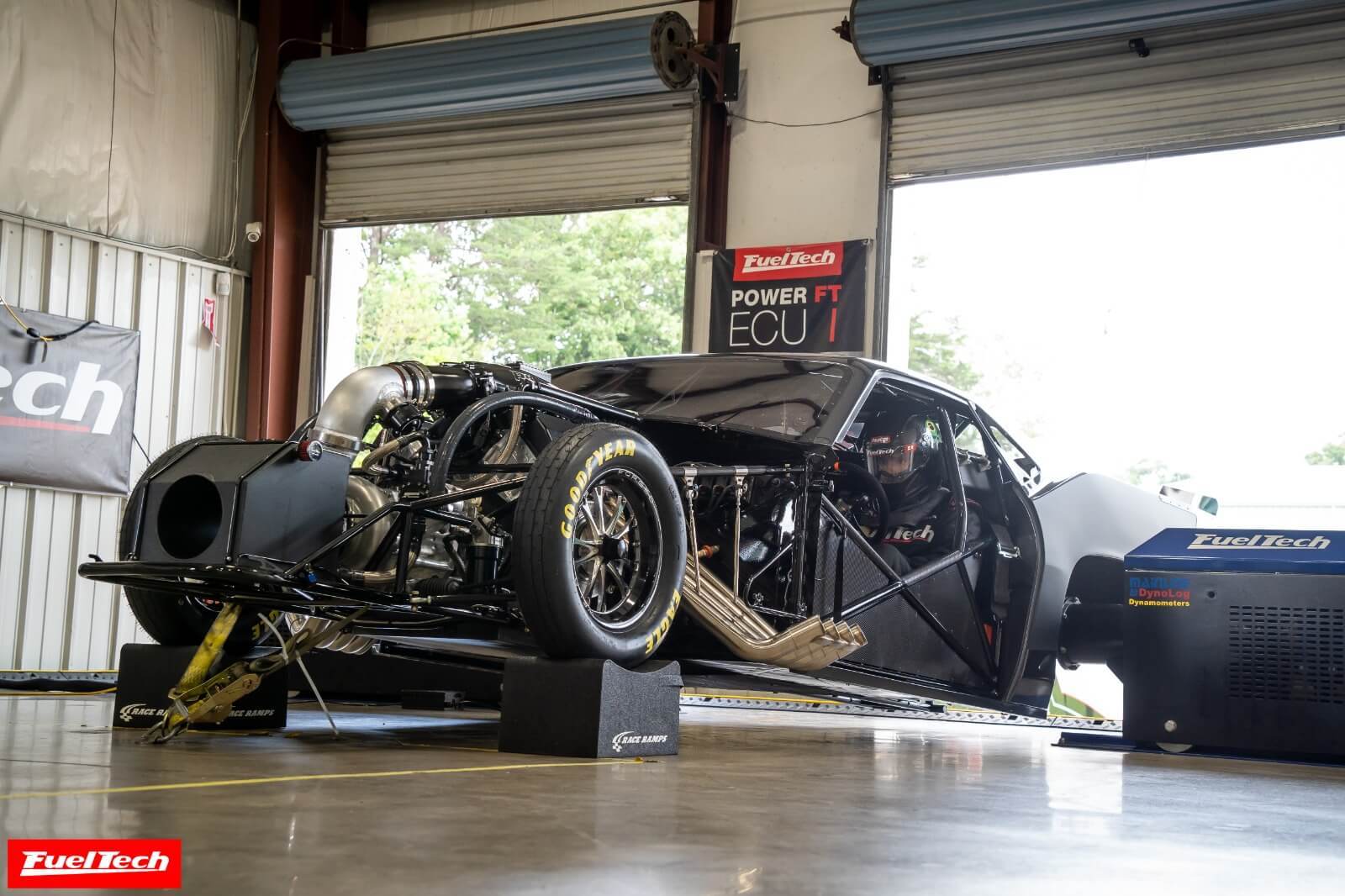 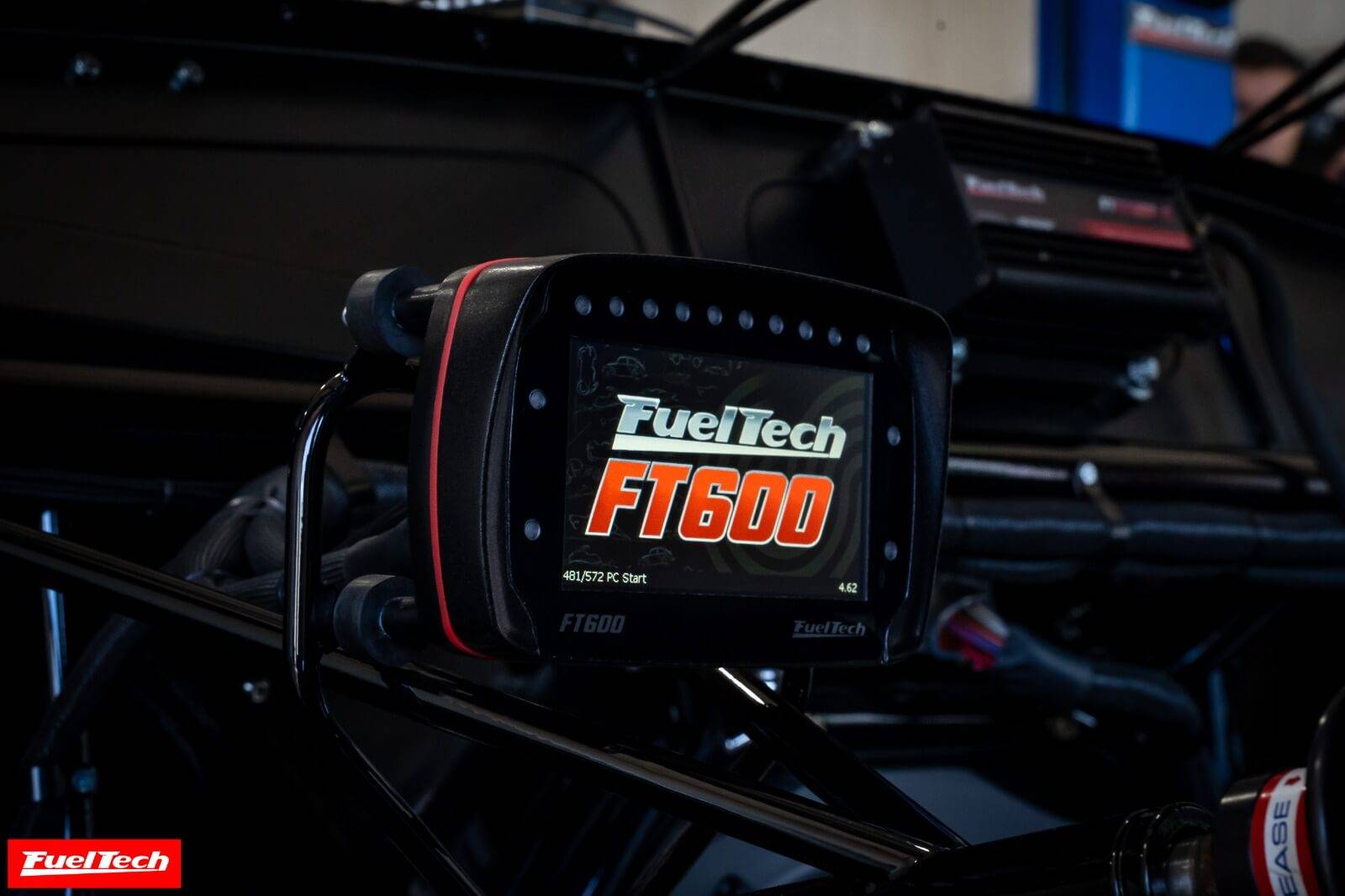 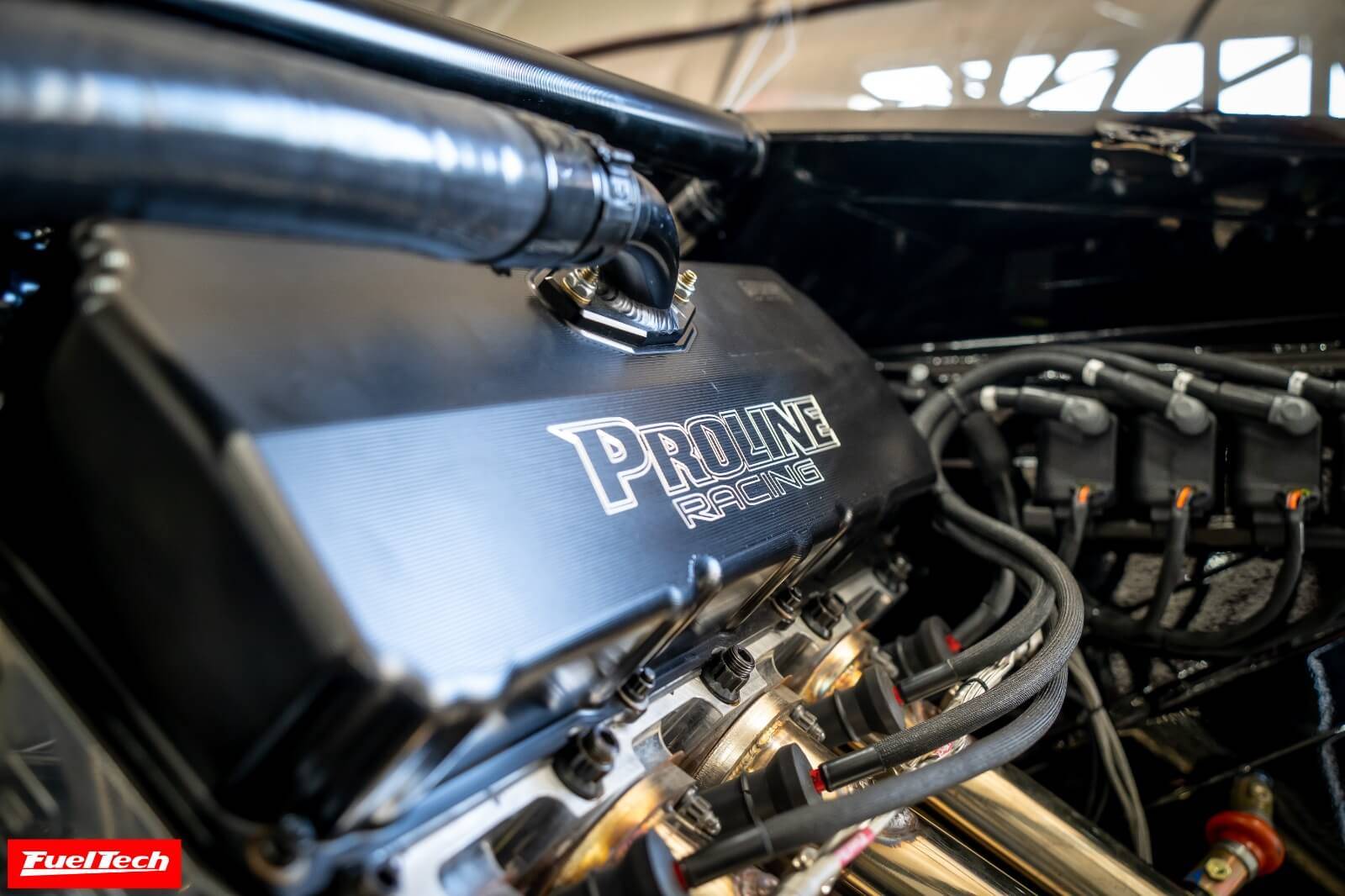 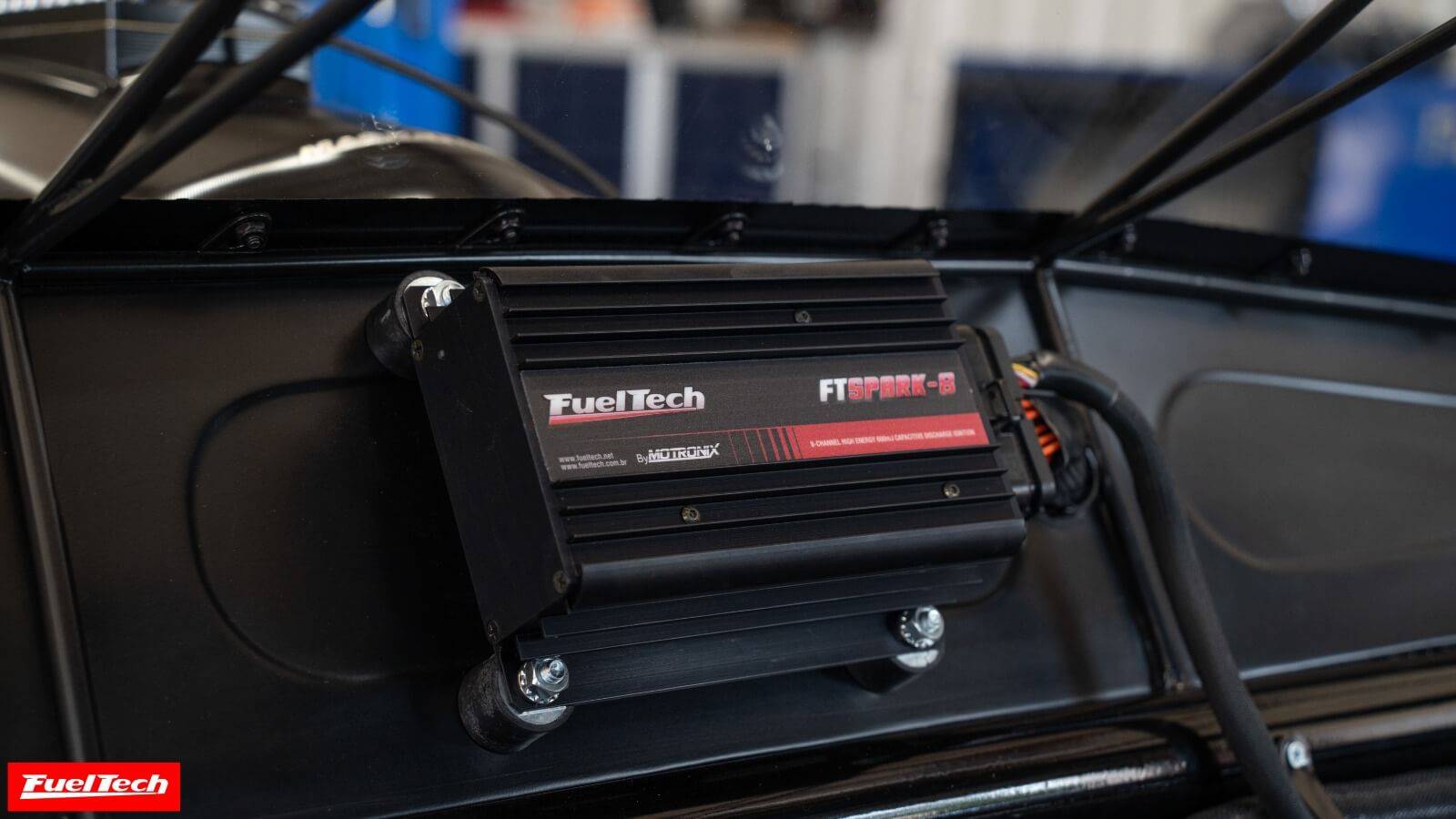 The 2,700+ WHP demands big fuel delivery and this ‘Cuda relies on massively large fuel injectors, which require a FuelTech 8A/2A Peak and Hold driver to help keep them under control. FuelTech offers three levels of Peak and Hold drivers to keep up with today’s low impedance fuel injectors from four to sixteen fuel injectors. The company recently released FT Injector in three sizes—720 lb/hr, 520 lb/hr, and 320 lb/hr, which are measured using 90 psi and are capable of flowing as low as 30 psi and as high as 130 psi. The FT Injector can handle all types of fuel, including gasoline, ethanol, methanol/alcohol, nitromethane, nitropropane, MTBE, and ETBE.

The FTSPARK Capacitive Discharge Ignition (CDI) is a championship-proven ignition system that has since been upgraded with a Gen II variant. The FTSPARK Gen II offers a minimum and guaranteed 750mj of energy at 140 amps and has been tested up to 850mj in certain applications. FuelTech tests every unit prior to boxing to ensure each one meets the 750mj minimum guarantee. That output shows a 25 percent increase over the FTSPARK Gen I and a 12.5 percent increase in amps at the primary coil. All Gen I ignition boxes are upgradable to Gen II and it uses the same enclosure, making the swap easy and quick. The CDI ignition is paired with a set of eight CDI Racing Ignitions coils to light off the methanol fuel being forced into the cylinders.

The combination has helped Sayler race hard in the Top Sportsman, often times being at or near the top of the qualifying ladder. The Montana-based racer has also run in the 3-second zone in the Outlaw 10.5 eliminator during the Street Car Super Nationals, held at The Strip, located in Las Vegas Motor Speedway. From competing in Top Sportsman with nearly 3,000 WHP to the smoking tires of professional drifting, there is a reason you’re seeing #FuelTechEverywhere

FuelTech USA, a leader in engine management systems for race vehicles, is proud to announce it will be displaying during the SEMA Show 2022 in booth number 23229, located in the Central Hall.

It is the last combination that we are focused on for this FuelTech exclusive video, a big-block Chevy that spun the Mainline Hub Dyno to a robust 1,789 WHP!